When Secwepemc/Ktunaxa First Nations filmmaker Doreen Manuel found out she was this year’s Woman of the Year for the Women in Film’s Spotlight Awards she was in a word: “humble.”

But then the director of the Bosa Centre for Film and Animation at Capilano University — the first Indigenous woman to head a major academic filmmaking training institution in Canada — took a beat.

“I was raised by a leader, George Manuel (Grand Chief of Neskonlith), and a spiritual leader, Marceline Manuel, and they raised me to leave this world better than I came to it — to work with my people and always care about making things better,” said Manuel.

“Any time I am working on anything, I am looking at ways to create equality and a fair and healthy work environment. I never really stop to think about it.

“I don’t drink or party or really have a social life. My social life is the people I work with and continuing to work with them, so everything I do and everywhere I go is all geared towards that kind of thought.”

Manuel’s award and others from the Women in Film and Television Vancouver (WIFTV) organization were handed out Tuesday at the 20th annual Spotlight Awards Gala.

The 30-year-old WIFTV is a non-profit that focuses — through many initiatives — on securing women’s equal treatment and participation in screen-based media.

“What feeds me is watching emerging filmmakers making it and getting awards and being celebrated,” said Manuel, who didn’t embark on a film career until about a decade and a half ago. “It makes me feel really good. Seeing women getting the kind of roles in all areas that they should be getting and Indigenous people thriving, that’s what feeds me; but it’s really wonderful to be recognized by my peers.” 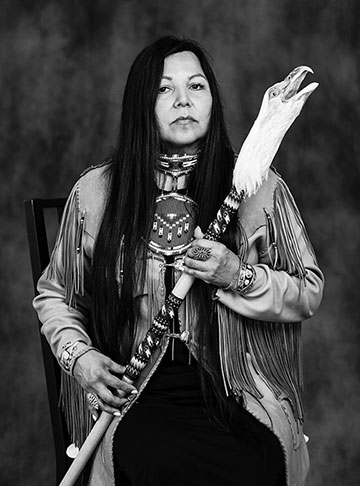 Doreen Manuel is this year’s recipient of the Women of the Year award
at the Women in Film Spotlight Awards. Photo: Wendy D.

For fellow filmmaker and WIFTV Spotlight Awards jury member Loretta Todd, Manuel’s devotion to making the community around her stronger combined with her own creative output is what led to the award.

“Doreen works tirelessly for Indigenous storytellers, knowing our strength brings much good to our people,” said Todd. “Indigenous filmmakers are transforming Canadian media. Doreen knows this and supports our filmmakers to acquire the skills and experience they need.

“Doreen is fearless and she encourages Indigenous women filmmakers to be fearless.”

Manuel comes from a tradition of storytelling and has worked as an educator in both rural and urban areas.

Her media road began when she became the Canadian correspondent for Native Heartbeat and Northwest Indian News out of Bellingham.

Manuel graduated from the Cap. U. film school in 2004 and then two years later became the program co-ordinator for the school. Last November she left that job to take over her current role at the Bosa Centre.

One of the changes Manuel has made in her new role is to cut a path for women into movie and TV camera departments.

“Women have a hard time wrestling the camera away from the guys. So as soon as I stepped into this position I talked to the co-ordinators, I said the next person we hire to teach camera has got to be a female, period,” said Manuel, who is also the owner of Running Wolf Productions.

Manuel’s road to this success seems short, but she had a lot of making up to do after she had stuttered and stumbled earlier in life. A residential school (Port Alberni) survivor, Manuel said with the help of therapy she came to realize the abuse that she suffered and the trauma she carried forward was what was slowing her down.

“I was stuck behind a huge learning block,” said Manuel. “I felt stupid. But as soon as I addressed that learning block I became an A+ student.

“I will never get over what happened to me in there, but to get through it enough to realize it wasn’t my fault,” added Manuel. “I could realize that I’m a good person and I deserve good things. Now I am here at the head of a film centre, maybe I should have accomplished that years ago but I had too much on my shoulders to accomplish that.”

Now Manuel is busy creating and encouraging others to do that. Right now she feels a slight sea change in her industry and sees more women and Indigenous women on sets in the editing suites and delivering scripts — although she admits she would really like to see more original stories come her way.

“Producers, production companies are starting to care and move in that direction,” said Manuel. “We’re the ones with the power, the grassroots power.”

While this award is a nod to Manuel’s deep commitment to help others, she says — with a big laugh — that she is currently in a position of needing some help. In this case, a budget to finish a documentary about White Paper policy.

This year is the 50th anniversary of the White Paper, formally known as the Statement of the Government of Canada on Indian Policy, 1969. The policy paper was an attempt to abolish previous legal documents pertaining to Indigenous peoples, including the Indian Act and treaties, and assimilate all Indigenous people.

Manuel was approached by the Union of B.C. Chiefs and asked to make a film.

“They had a little pocket money they gave me, but it was not enough to make the film,” said Manuel.

“This is funny. I am working on a documentary that I can’t get any funding for. I think that’s hilarious.”

Manuel, who sits on various boards and has helped shape Indigenous programs for Telus Storyhive and Emily Carr University of Art + Design, tirelessly works to make changes to the film world’s status quo.

One fight she is dead serious about changing is the criteria for what constitutes Indigenous film.

Indigenous cinema should be defined as the three “above the line” credits, says Manuel. In film talk that means producer, director and writer. It’s not often that there are Indigenous producers.

“We need to tell our own stories,” said Manuel, who is also an expert hide and bead artist. “Our young people are growing up and adopting other cultures.

“They need to see their own people portrayed in the way that we are so they can adopt our wellness and our culture and learn to understand themselves and their identity, and then we are going to see suicide rates drop because are going to be empowered by being able to pick up a camera and tell their life stories.”